“If Canada’s judges weren’t independent, our courts would be like hockey without a referee...“

There are three branches of government: judicial, executive, and legislative. The judicial branch interprets the law, resolves disputes, and defends the Constitution including the Canadian Charter of Rights and Freedoms. In order to do so, the judiciary is distinct from, and operates independently of, all other justice system participants,  as well as  the other two branches of government. 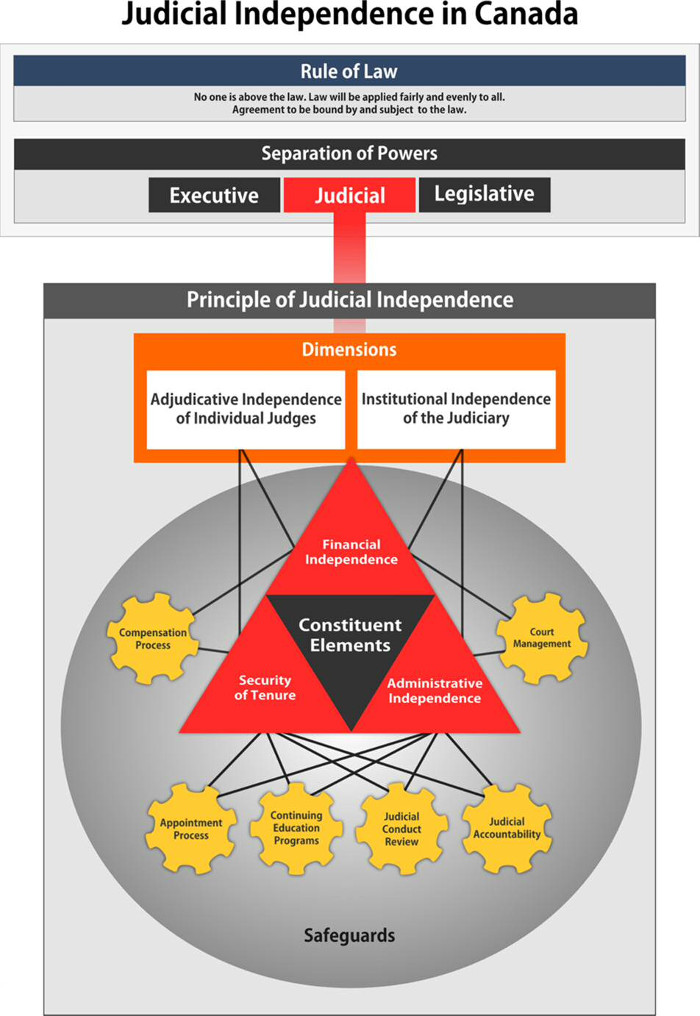 Judicial independence means that judicial officers of the Court, such as Judges, Justices and Judicial Justices of the Peace, have the freedom to decide each case on its own merits, without interference or influence of any kind from any source, including the other  branches of government. While judicial decisions rarely result in everyone being happy, our Canadian justice system is based on a public confidence that decisions, whether they are popular or not, are made after a full and fair hearing. It is essential that the judiciary both be independent and appear to be independent,  so that there is public confidence that judicial decisions are made without bias or outside influence.

Security of tenure prevents the arbitrary removal of judges. This means that if a judge makes a decision that the government does not like, or that goes against the government, the judge cannot simply be fired or removed from office as a result. Financial security provides an arm's length process, through a special independent remuneration commission, to determine the salaries and benefits paid to judges.  Administrative independence enables the Court to manage itself, rather than be managed by others.

While these protections relate to judges, they are for the benefit of the public, not the judges.  These protections enable courts to apply the rule of law that Canadians, through the electoral and legislative processes, have decided should govern them.

What does “judicial independence” mean?

Judges must be free, but obliged, to decide on their own.

Judges must be set apart from someone else’s influence or supervision.

Judges must be insulated against and independent from any and all sources of improper influence. This includes:

Why do we expect our judges to be independent in Canada?

The fundamental concept of judicial independence exists for the benefit of all citizens, not judges.

Why does judicial independence protect the judges, the decision makers, from improper influence?

This protection is enforced so that:

In simple terms “judicial independence” is a matter of trust:

Judicial independence is the shield that secures and protects those fundamental, constitutionally enshrined values:

Judicial independence is important to you because it guarantees that judges are free to decide honestly and impartially, in accordance with the law and evidence, without concern or fear of interference, control, or improper influence from anyone.

For more information about Judicial Independence and what it means for you: